Before about a month ago, I thought I only knew one person who had been to San Sebastián and I don’t recall him ever saying anything memorable about it.  However, once we started planning this trip, people started coming out of the woodwork to rave about how it has the best food.  They weren’t kidding.  The New York Times 36 Hours in San Sebastian is essentially a menu of which pintxos to order in each bar in the old city.  (An over simplification, but pintxos are similar to tapas.)  If you’re someone like me who gets full quickly, but wants to try everything, this is your city.  If you’re someone who doesn’t get full quickly, this is also your city: the pintxos are plentiful and cheap.

I cannot say enough good things about San Sebastián, which within about 10 minutes of arriving, I already knew it was my new favorite city.  Not only does this city have epic food, it has old world charm and bridges that reminded me of Paris and Prague, modern art exhibitions, gorgeous beaches, and amazing hiking and surfing.  My only complaint is that I had to leave. 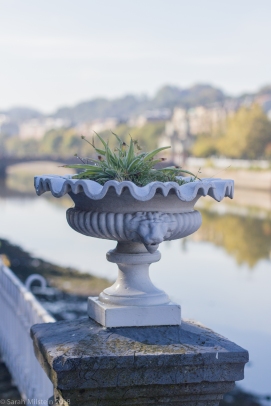 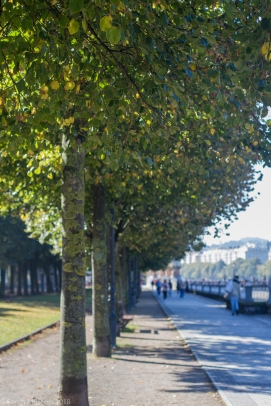 Stay.  We stayed at the One Shot Tabakalera House, which is steps away from the bus station and in a converted tobacco factory, which now houses various art and cultural exhibitions, and several places to eat and drink.  The hotel was a bit of a walk to the pintxos bars, but frankly, I think it was necessary to walk off food between meals.

Eat.  My favorite part about pintxos is you can try a ton of things—they’re relatively cheap (often under 4€ each) and small, although many are very rich—so pace yourself! At Bar Txepetxa, I loved the anchovies with bell peppers and the toothpick with green beans and an anchovy.  I even went back a second night in a row—this coming from someone who doesn’t usually like anchovies (they weren’t so potent and salty as the ones I’ve had before).  At Borda Berri, the crispy roasted octopus was the best I’ve had (and even though not on the menu, they didn’t miss a beat when I ordered it).  The creamy, almost soupy risotto, was delicious as was the slow cooked beef cheeks (carillera de ternera al vino tinto).  People lined up at La Viña for the tarta de queso, which was similar to, but in my opinion, better than cheesecake.  I also loved their albondigas.  At Bar Nestor, we ate tomatoes and peppers, but they’re known for their tortilla, which you apparently have to arrive early for, and they were also serving the largest pieces of meat I’d ever seen.  At La Cuchara de San Telmo, I tried the foie con compota de manzana, and made friends who let me try their blood sausage, pig ear, and an “ugly” tomato.  While everything was good, I think it was too rich for my taste.

I also drank a lot of great coffee.  My favorites were at Sakona (which also had great toasts), Old Town, and Taba. 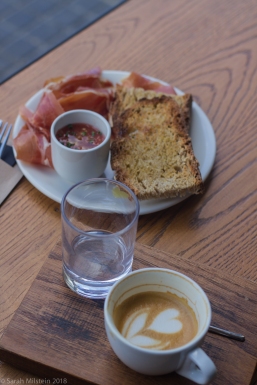 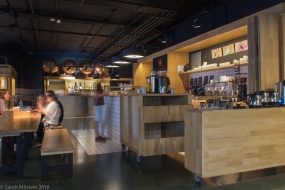 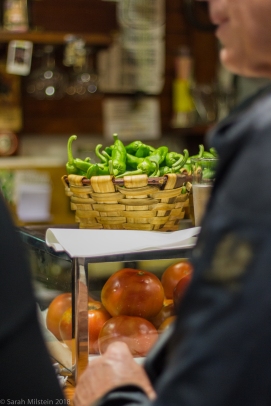 I took so many photos on our hike to Pasaia, Playa de La Zurriola (the surfer’s beach), and Playa de Ondarreta that I will post these separately.